Ashley McMakin is the owner of Ashley Mac’s, a fabulous cafe with five locations in the Birmingham area. This week, Ashley joined The SavvyCast to delve into the story behind one of my favorite restaurants!

In this episode, Ashley McMakin shared how her love for food led her to create Ashley Mac’s. Ashley described how what started off as a home-run catering company led to her incredibly successful restaurants. Additionally, we discussed the ways they had to adapt during the pandemic, their most popular menu items, and their holiday food bundles. 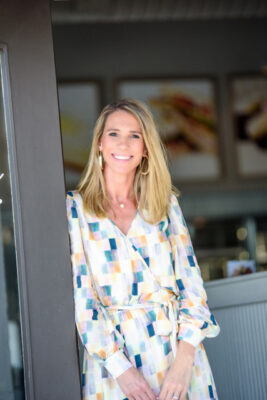 Who Is Ashley McMakin?

Ashley McMakin has a degree in marketing and advertising from the University of Alabama. Today, she and her husband live in Birmingham, Alabama. Ashley is a mom to three, “but usually four, often five”. Additionally, Ashley is passionate about bringing people together over food, a passion she learned from her mother and grandmother. As a result of this passion, Ashley started a catering company out of her condo as a newlywed. Eventually, the catering company outgrew Ashley’s small kitchen, and it became what is now known as Ashley Mac’s. Ashley Mac’s now has locations in Cahaba Heights, downtown Birmingham, Inverness, Riverchase, and Homewood.

Questions We Answered In This Episode:

I hope you enjoyed this episode! As always, if you have time to rate, review, and subscribe to The SavvyCast on iTunes, it would be SO appreciated!!! Blessings to you!!!

If you like this podcast, also be sure to check these out:

How durable is marble? That is always a hot topic in the home design world.🙌Today, I want to share with you a quick test on how honed and polished marble handles some dirty kitchen tasks.
.
.
Of course, this test is only a short-term test. There could definitely be more effects over time, but with my initial testing, both marbles held up perfectly!😉
.
.
Do you have any feedback when it comes to marble countertops? I would love to know your thoughts/opinions. Are you a fan of marble? Or do you prefer to stay away from it?
.
.
#marblecountertops #kitchendesign #kitchencountertops #kitchenlife #kitchenremodel ...

Looking for a Fall meal that takes less than 20 minutes to put together? Then this is FOR YOU! Not to mention it’s healthy and hearty🙌😉
.
.
All you need for this recipe is 7 simple ingredients: steamed lentils, tomato roasted red pepper soup, mirepoix, minced garlic, extra virgin olive oil, canned fire roasted diced tomatoes, and chicken bone broth.👍It’s super simple!
.
.
For the full recipe + additional tips and tricks on how to make it, head over to the Family Savvy blog (link in bio) OR Google Family Savvy Lentil Soup for the recipe. Hope this helps!
.
.
#lentilsoup #fallfood #fallfoods #fallsoup #soupseason #souprecipe ...