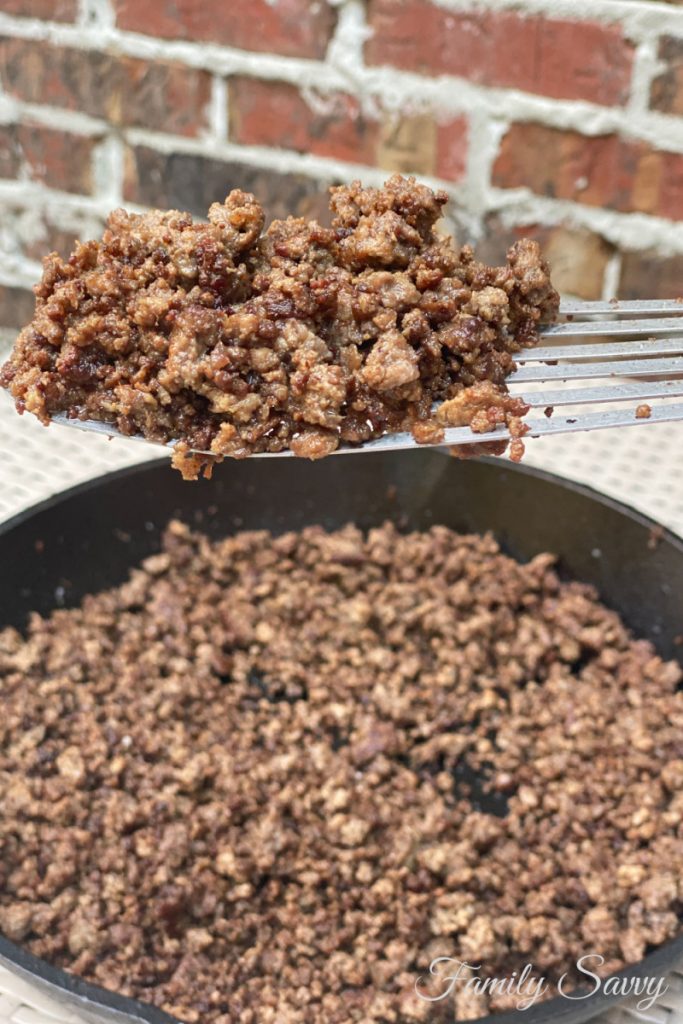 Follow these 10 tips and you’ll brown ground beef that has the best flavor, texture and color (not bland, grey and boring).

This week, I decided to go back to the basics by discussing how to brown ground beef. Anyone who cooks at all can use this skill to make good meals better.  Ground beef is the basis for many entrees, and browning it should not be haphazard. It makes a huge difference if the end result is savory, golden, and laced with brown bits. Pale, grey, spongy meat is not appetizing at all!!

In the following podcast, I talk about choosing ground beef and browning it with golden, crispy bits rather than soft, gray pieces of meat. I also share some tips + tricks that I use along the way. For those who prefer video, I share a short video of how I brown ground beef.

Ground beef has various levels of fat depending upon what you choose.  Starting with the highest fat and moving to the leanest includes the following: ground beef, ground chuck, ground round, and ground sirloin. I prefer ground chuck, which is typically 80% lean beef to 20% fat.

Salt beef and let it sit. 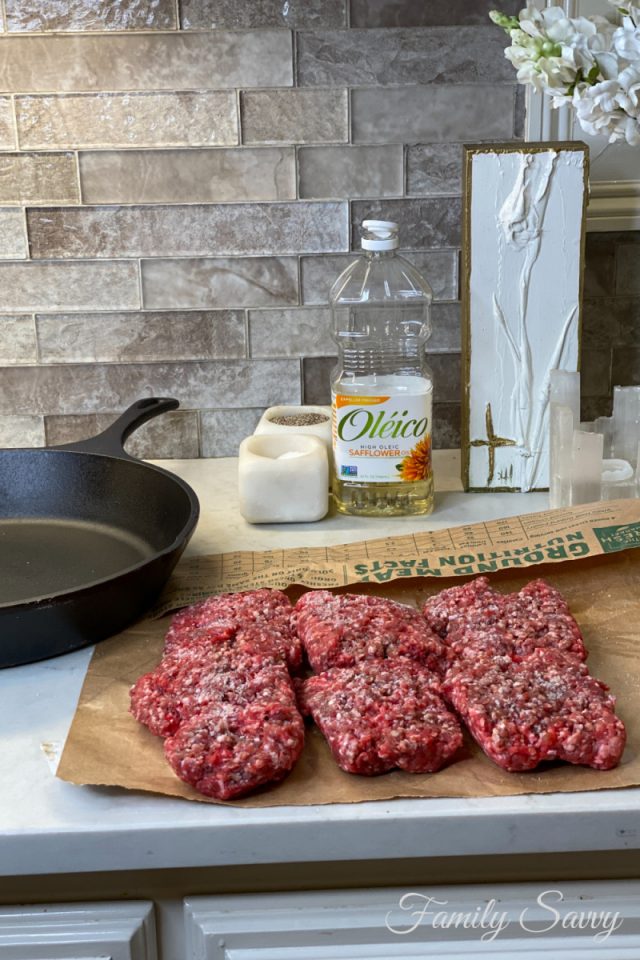 Use a good skillet.

A good skillet for browning ground beef should be large enough for meat not to be crowded. In my opinion and experience, cast iron skillets do a superior job of browning all meat, including ground beef. In a recent blog post, why a cast-iron skillet is the best thing you’ll ever buy, I talk about cast iron skillets. I discuss the advantages, maintenance, and recipes that go well in cast iron. I also link to my favorite skillets and where to buy.

No matter what beef I have to brown, I always add a bit of oil for superior browning. For one pound of ground beef, I add about a tablespoon of oil~canola or extra virgin olive oil. The skillet should get hot enough for water drops to sizzle when they hit the pan. This combination of hot fat in the skillet helps the meat to brown and form a golden crust.

Salt along the way.

Salt before the meat hits the pan, and also salt the meat while it cooks. Once the meat is fully cooked and brown, add a touch more kosher salt to finish it off. Adding salt in layers/stages makes for a much more flavorful beef.

Let both sides brown before flipping.

Like cooking pancakes, browning beef does best when letting each side sit in the skillet undisturbed until a golden crust forms. Then it is ok to turn. After both sides develop a crust and brown bits, the meat can be separated into smaller pieces which can cook until done. In the short video below, I show how to brown ground beef from start to finish.

Most beef, especially the higher fat versions, will release liquid that needs to be drained if there is enough to start covering the meat. Liquid will make the meat steam and prevent it from crisping and browning properly.

Cook until no pink whatsoever.

Make sure the meat is completely cooked to 165 degrees or higher. A meat thermometer is helpful in measuring the temperature. If you don’t have a thermometer, just cook until almost every piece is golden and nearly crisp. Breaking meat into tiny pieces safeguards against any uncooked meat.

Once the meat is cooked, finish with a final sprinkle of kosher salt. Because you salted before and during cooking, you don’t have to use a heavy hand at the end. It is best to taste and add salt as needed.

If you want to freeze the beef, simply let it cook, place in a ziploc freezer bag, remove the air, and label the bag with date frozen. Flatten the meat if possible for easier storage in the freezer. 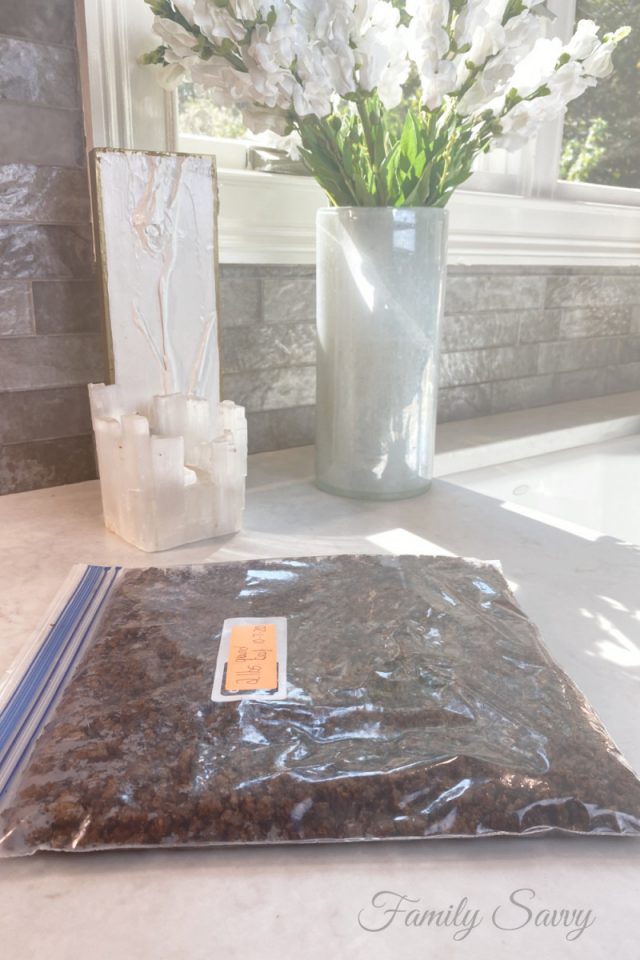 Can I brown ground beef and onion together?

I used to brown ground beef and onion together, but now I do them separately. Onions release a lot of liquid, and they make the beef steam and prevent crisping. I now use a separate skillet to saute and season diced onion, peppers, celery, etc….. It makes a difference and is worth the extra trouble.

I hope this basic blog post is helpful! If you know a young cook or newly married guy or gal who could use this basic information, please share it with them. As always, thanks so much for stopping by. Be blessed, and stay savvy!!!

What are YOUR kitchen must-haves? There are some kitchen gadgets that you simply cannot go on without OR they make cooking so much easier.🙌Please share what YOUR must-haves are!
.
.
If you’re interested in any of these items for yourself, then head on over to my LTK account (link in bio). I link to each individual product so that you can easily access and purchase any of these items for yourself!😘These are also GREAT items to gift anyone for a housewarming party, wedding gift, or bridal shower. These are sure to be useful and helpful to anyone!
.
.
#kitchengadgets #kitchengadget #kitchenlife #kitchentips #kitchentools #mixingbowl #dutchoven #measuringcups ...

❓Did you know what “Chocolate Bloom” is?❓It is when your chocolate had a greyish-whitish color. If you see that, it doesn’t mean your chocolate is bad!🍫It is just Chocolate Bloom! You can still use that chocolate.✅
.
.
Chocolate bloom may cause your chocolate to not be as good quality, but it is still good. It doesn’t mean that your chocolate has gone bad or is unusable.🙌
.
.
Since Valentine’s Day is around the corner, do you think you’ll be making any dessert with chocolate in it?❤️If you’re looking for any chocolate desserts to make, here are a few options:
1️⃣Chocolate Bundt Cake (that comes from a Box mix but tastes homemade)
2️⃣Gluten-Free Fallen Chocolate Souffle
3️⃣Best and Easiest Chocolate Fudge
You can find all of these recipes on my blog (link in bio) OR Google it to find each recipe.😘I hope this helps!
.
.
#chocolatebloom #chocolatedessert #chocolatefudge #chocolatebundtcake #bundtcake #chocolatesouffle #chocolatechips ❓ ...