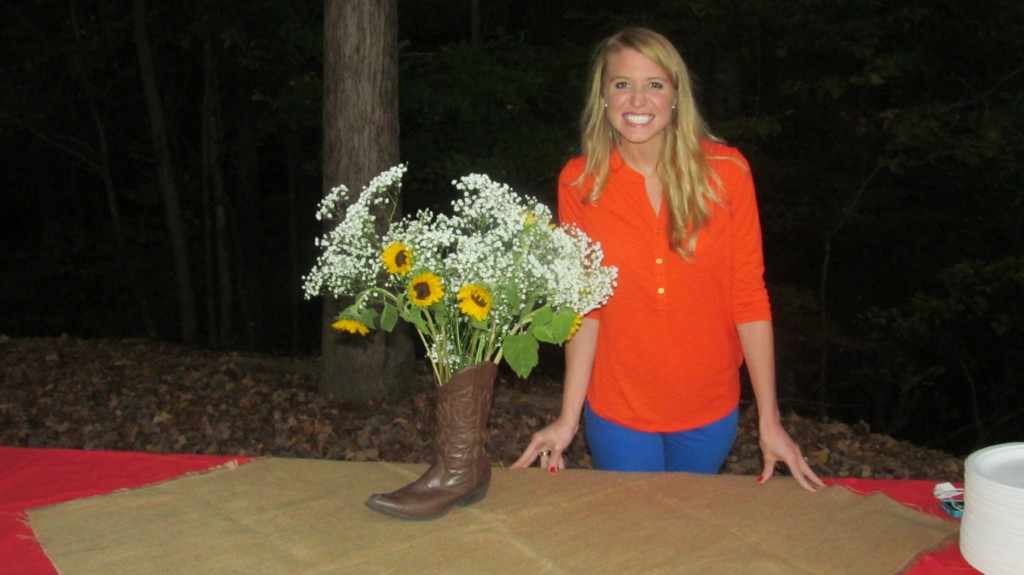 This Sweet 16 birthday party theme is one that we chose from this wonderful list~Sixteen “Sweet 16” Birthday Party Ideas. The hoedown was the perfect theme since the guests included boys and girls.

The evening was full of great food and lots of good, clean fun. I’ve outlined a few of the ideas that we used below and included resources when possible.

The Invitations were simple, brown paper with a photo of the girls on the front. Kalee added some burlap and raffia to the front and used some cute fonts on the inside.  These invitations were  inexpensive and went well with the Western theme. Here’s a snapshot of the front and inside….

The Decorations were relatively inexpensive also, especially since we had two families from whom to pull resources. Frannie’s family had enough Christmas lights to accent the deck and back yard. They also had multiple tables 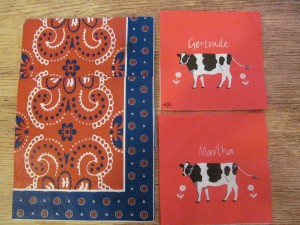 and chairs, which was wonderful, as we didn’t have to rent those. Borrowing from friends and neighbors is always helpful.

I found bandana motif paper goods–dinner plates, dessert plates, and napkins– at Tuesday Morning. I also found one package of “cow” dessert napkins and couldn’t resist adding them to the mix. Adorable!

Bandanas by the dozen on amazon has a full selection of traditional paisley print bandanas in assorted colors and are priced just a few cents over $1.00 apiece. They are 100% cotton and printed on one side (which worked fine for us).

We both bought mason jars, table coverings, candles, flowers and various other items that didn’t cost much at all and that we were able to keep to use for future parties. After all, a Sweet 16 party precedes the big whamoo–high school graduation. (For Kalee’s suggestions on this grand event, read her list of 8 Great Graduation Party Ideas).

Back to the Western Hoedown…Here are a few photos of the back yard. (We were scrambling to get pics before it turned dark, so we only have a few–all taken before food was placed on tables).

The food was barbecue and all the fixings. Paige and I decided to buy most of the meat and make our own sides. We purchased barbecue chickens, quartered, and I also made this beef brisket. We put out the meats, buns, several barbecue sauces, and “Wickles” pickles for condiments. Note: If you want to make your own white barbecue sauce, give this MissAlaTenn White Barbecue Sauce a try!

Here are the sides that we served at the barbecue.First, I made Best Ever Mac & Cheese. It is the perfect side to serve at a large gathering, as it doubles easily to feed a crowd. The pan that I served was huge, and there wasn’t a macaroni noodle left after the party!

No barbecue is complete at my house without a side of this fabulous crunchy slaw. It is a guaranteed crowd pleaser, and it super easy to double, triple, or quadruple! I’ve never taken this slaw anywhere without getting multiple requests for the recipe. The dressing can be made ahead also, cutting down on prep the day of the event.

Barbecue also calls for baked beans, so I made Conecuh sausage baked beans for a crowd. These are hearty and filling, and most guys gobble these up. (I love this kind of dish too; it is right up my alley!)

For the dessert table, we featured a cowboy boot cake with the girls’ names on it. We put the cake alongside trays of cookies & bars, bowls of candy, skillet blackberry cobbler, and strawberry brownies. The brownies are a great party recipe, as they can be made ahead, cut into perfect squares, and frozen (well wrapped) until the day of the party.

As for the beverages, I tried a Pinterest idea that didnt turn out as I had hoped. It was a recipe for “the best punch in the world” that is floating all over Pinterest. It was lots of trouble, mainly because I was making enough to fill 40 mason jars, and for some reason, it just didn’t taste right. After sitting in the fridge for a day, the mixture turned a tad cloudy. Next time, I’ll do canned drinks on ice~this makes everyone happy!

The entertainment was provided by a friend and professional dancer who led the group in line dancing and put a hoedown flair into the Western theme.  The kids kicked their heels to everything from Boot Scootin’ Boogie to Thriller to lots in between. Since we had a sit down meal, we played music during dinner and had dancing for a couple hours after.

Party Favors: There are several cute and inexpensive ideas for sending party guests home with a treat. Here are a few of my favorites:

A Few Extra Party Tips: When having a party or any gathering for teenagers, especially if boys are in attendance, FOOD is key. Large servings are a must, so these wonderful pans can be a lifesaver. As long as tables have decorations, the aluminum pans won’t really be “seen” but will just fade into the background. The best thing about these large pans is that once the party is over, they can be tossed.

Bandanas are a fabulous way to accent Western parties, so grab them any time you see a great deal. I found some at The Dollar Store (2 for $1.00)  and bought all that they had in stock. Even though they were only printed on one side, they were fine to use as napkins and to line bread and dessert baskets.

Fresh flowers are always a nice touch, but they are expensive, and teens don’t really care much about them. We spent a tad on flowers but only to put on the dessert table.

A fire pit is a huge draw for teens and another option for providing a “space” to congregate and fellowship.  A table with ingredients for smores is always nice, but just having chairs and a fire is plenty to keep a handful of teens occupied. A bonfire is a wonderful option, but we kept it simple.

Finally, the most important thing that I learned was that hiring a photographer or videographer is key. We didn’t do this, and we had only a few photos at the party’s end.  We assumed that the kids would take lots of photos and that we parents would take plenty of pictures, but they didn’t. Once the party began, we were busy the whole night and never got around to taking many pictures. For future special events, hiring a picture taker is at the top of my list.

I’d love to hear back from those of you who have other party ideas–Sweet 16 or otherwise! Sharing with each other is the best way to stay savvy:-) If you’d like to receive Family Savvy updates in your email inbox, all you have to do is subscribe. Your personal information will NEVER be shared. Thanks so much for stopping by!

Blackberry Farms is one of my favorite places, and this cookbook brings some of their fabulous food straight to my own table. If you haven't scooped up this amazing cookbook, then I highly recommend!⁣ This cookbook offers such good southern cooking.
.⁣
.⁣
This is Summer Squash Casserole made Blackberry Farms style. This dish is so beautifully delicious that I can't get enough.😍 ...